Agnes Emma was the seventh of nine children born to George Wentworth Baker and Eveline Lydia Harney Baker on September 11, 1924 in Lodgson, Oregon, on a tribal allotment near the headwaters of the Siletz River. The midwife was her mother’s mother, Elizabeth Juliana Tole Harney. 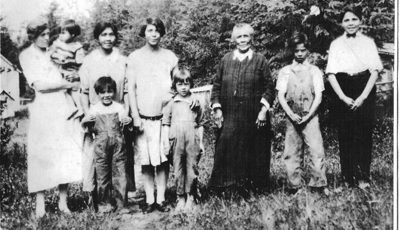 Aggie grew up close to the Earth with her brothers and sisters, gathering greens, picking blackberries and apples, riding horses, fishing and gardening. “At first we were given four plants to take care of. When I was old enough to go to school, I was responsible for four rows.” They had chickens, milk cows, sheep, longhorn cattle and horses, canned lots of fruit every fall, and there were plenty of eels in the creek, so they never went hungry.

Her family lived without electricity. Aggie remembers hearing the happy sounds of her family talking and laughing around the kitchen table.

The Takelma language was spoken in her home, but not encouraged outside of it. Always independent, as a teenager Aggie insisted on dancing traditionally in her buckskin dress, even though this was banned by her Catholic church. She graduated from Taft High School in Lincoln City, Oregon in 1942, where she played six string guitar, piano, and organ.

Over the next years she pursued a wide variety of careers, including hiking far into the woods to gather cascara bark and other wild plants, singing in a band, being a bouncer at a nightclub and a barber in a jail, driving a log truck and setting chokers for the logging of old-growth trees, racing stockcars, working as a scrub nurse at a hospital, and managing a restaurant. She also fished and hunted deer and elk.

Agnes was married three times and had three sons and three daughters. [Over the years, she became extremely proud of her five generations of descendants.]

Around 1970 she made a major shift in her life, deciding to finally take on the spiritual path that she had always felt calling her, along with the medicine name of her Takelma great-grandmother, “Taowhywee,” translated as “Morningstar.” In the early 1980’s she was invited to join the Cultural Heritage and Sacred Lands Committee of the Confederated Tribes of Siletz

From 1974 to 1989 Aggie worked as a manager and counselor at the United Indian Lodge in Crescent City, California. One main focus was alcohol problems, through prevention, intervention, and rehabilitation. Another focus was helping children of poor families. During this time she received criminal justice training.

In her 50s Aggie enrolled at Southern Oregon State College in Ashland and joined the Omicron Delta Kappa sorority.  She majored in Psychology with a minor in Native American Studies and graduated with a B.A. in 1985.