For thousands of years Agnes Pilgrim's Takelma ancestors, the People of the River, hosted a Salmon Ceremony on the Rogue River. Among many purposes, this Takelma tradition sought to thank the salmon for their return, conserve the runs of salmon for the long-term, and affirm their cultural practice of "reciprocity" and "giving back" to Mother Earth.

That all changed in 1856. Following the swift takeover of their Rogue River homelands by miners and settlers, the Takelma people were relocated to a distant federal reservation on Oregon's north coast. This cultural upheaval slashed the Takelma population and halted their annual Salmon Ceremonies for a long, sad period.

Fortunately, memories of the Rogue River Salmon Ceremony did not disappear entirely. Frances Harney Johnson (1844-1934, Grandma Aggie's great aunt) was born in the Rogue Valley. She had participated in salmon ceremonies as a child, until forced to move to the Siletz Reservation at the age of 12. Luckily, Frances never forgot her early life along the Rogue River. 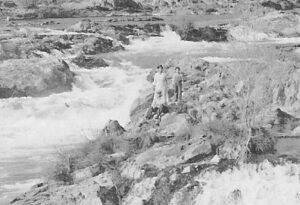 At 89 years Great-Aunt Frances, along with Aggie's father and two brothers, accompanied linguist John Harrington on a 1933 field trip to the Rogue Valley and Takelma homelands. Based on her childhood recollections, Frances led the group to the Ti'lomikh Falls village and ceremony site on the Rogue River, upstream of Gold Hill, Oregon. 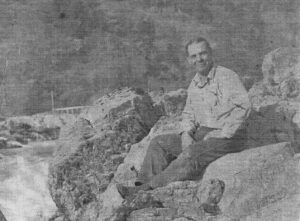 Harrington took a photograph of Aggie's father, George Baker, sitting in the "Story Chair" next to the falls. This is where generations of Takelma tribal elders had watched for the arrival of the first Chinook salmon, which signaled the beginning of the Salmon Ceremony. For decades, this priceless photo was lost in the shuffle.

Seventy years later, Thomas Doty, a Takelma culture historian, began delving deep into John Harrington's Rogue Valley field notes from 1933. Doty was also walking the shores of the Rogue River, looking for signs of the Takelma culture before their 1856 removal. His goal was to confirm the actual location of Ti'lomikh Falls and the adjacent Takelma village.

In January 2007, Grandma Aggie found the 1933 photo of her father and brothers at Ti'lomikh Falls, but didn't know its significance. She soon met with Thomas Doty at Steve Kiesling's property next to the falls. When Tom read Harrington's field notes aloud, the history and the photograph came together. With the photo in a plastic bag, it only took Steve 10 minutes to make his way out to the island and locate the Story Chair!

Six months later, Grandma Aggie and her family brought the Rogue Salmon Ceremony home to Ti'lomikh, the place where her ancestors had lived and flourished for centuries. Learn more about the ceremonial process.

Steve and Mary Kiesling generously co-hosted Salmon Ceremonies on their property by Ti'Lomikh Falls for many years. They also expanded public awareness of the site's history by creating a scenic overlook by the falls on Upper River Road, one mile upstream of Gold Hill.

The revival of the Salmon Ceremony at its original home on the Rogue River, spearheaded by Agnes Pilgrim, her family, Thomas Doty, Steve Kiesling, and many others, is a precious addition to the legacy of the Takelma culture.

With deep respect and appreciations to
native historian and storyteller
Thomas Doty (1952 - 2020)
for his significant research and writings
on Takelma history and culture. 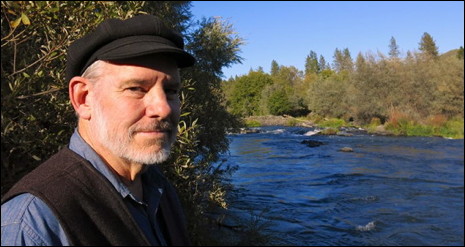 Watch this four-part Tribute to Thomas Doty: One With The Story, produced by John Letz at Rogue Valley TV (2020) (28 min. each).
‏Part 1: There Was a House ‏
Part 2: Honing the Art ‏
Part 3: Digging for Roots
‏Part 4: Rippling Out