One of Agnes’ most significant contributions to the Takelma cultural legacy is the restoration of the annual spring Salmon Ceremony on the Rogue River. This gathering was practiced by the Takelma and neighboring tribes for thousands of years.

However, in 1856 the tradition vanished, when the Takelma were forced to leave their Rogue Valley homeland and move to the Siletz Reservation near Newport.

In an interview with Marisol Villanueva, Agnes describes the Salmon Ceremony’s purpose and it’s return to the Rogue Valley in 1994 (from Grandmothers Wisdom: Reverence for All Creation, page 440):

“My people have a legend that salmon look like us humans and live in beautiful cities below the ocean floor. Every spring and fall they choose to put on the shape of the salmon and come back upriver to feed us.

“My people, the older ones, did the (Salmon Ceremony) gathering before anybody started fishing, to honor the salmon, and so Creator would bless them, and the salmon would come home.

“They hadn’t done this gathering for a very long time, and in 1993 Spirit told me to bring it back. …I felt the presence of the old ones, who guided me.” 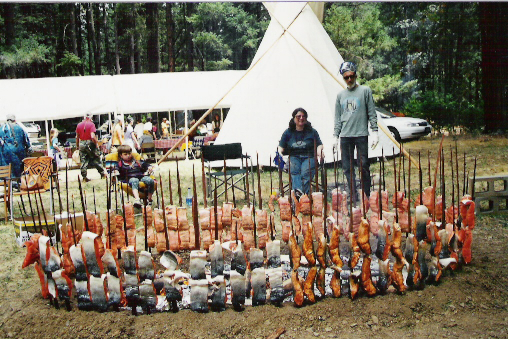 Salmon on redwood skewers for the feast after the Salmon Ceremony

In 1994, Agnes, her family, and Dennis Martinez began hosting a Salmon Ceremony each June at Kanaka Flat (by the Applegate River upstream of Ruch) in the Rogue River National Forest. Dozens of salmon were baked traditionally on redwood skewers around a long pit of coals.

Agnes and her husband Grant Pilgrim guided participants in the ceremonial process, based on information gleaned from native elders they had interviewed. Agnes described the ceremony to Marisol Villanueva in this way:

“I have a salmon cooked, and I give a taste to everybody there, elders down to little people. I have a beautiful, big fish bowl. Everybody brings all the skin and bones back to me to put in the bowl. When the divers come out of the purification sweat, with cedar boughs in their hands, I place the skin and bones on the boughs. Then the drum starts and drums the divers to the river. They stand on the river’s edge and pray to the Salmon Nation. Then they dive deep in the water and place the remains underneath some rocks. They continue to pray with these offerings to the Salmon Nation. When they come out of the water, the young men are greeted as warriors.”

Thanks to a 1933 photo that Agnes rediscovered in January 2007, the original location of the Takelma Salmon Ceremony, used for centuries by her ancestors, was confirmed to be at Ti’lomikh Falls on the Rogue River, just upstream of Gold Hill. [See more at Ti’lomikh Homeland Rediscovered.]

Five years later, during the 2012 Salmon Ceremony, Steve Kiesling and two expert rafters helped Grandma Aggie float down to the island by the Falls and sit in the rock bench known as the “Story Chair.” Long ago Takelma elders would sit in that exact place to watch for the first salmon and then call for the Salmon Ceremony to begin. 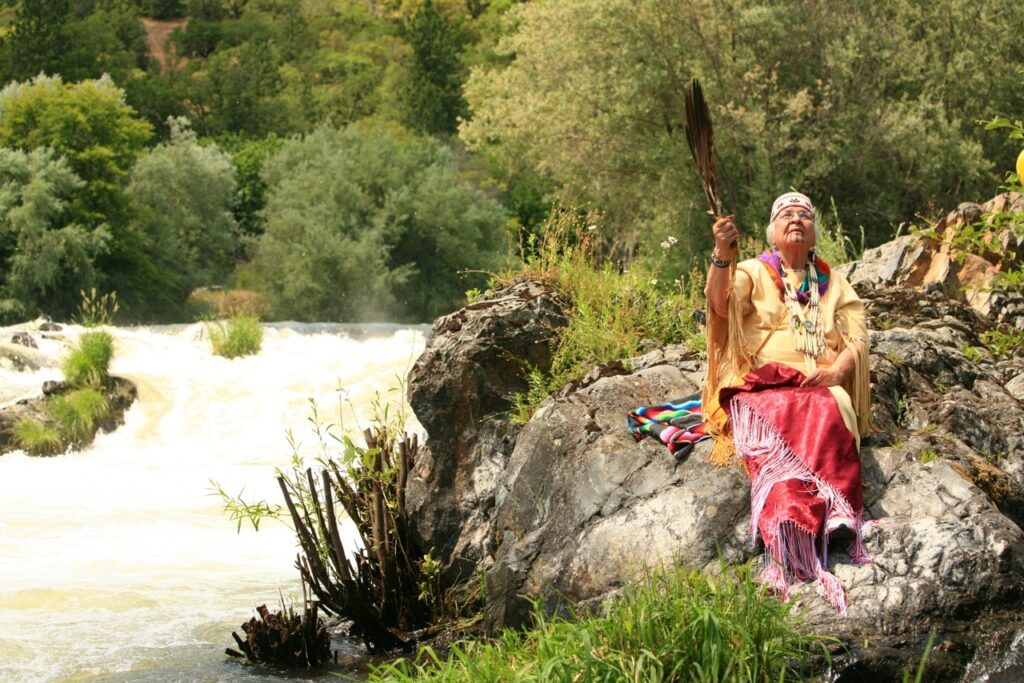 Agnes Pilgrim in the Story Chair next to Ti’lomikh Falls (Rory Finney photo, 2012)

The 6-minute video, First Salmon Ceremony, produced by Oregon Public Broadcasting, includes Grandma Aggie sharing her purpose and vision with all who attended. Here are some quotes:
“I know the history of this land, and I know my people were here (at Ti’lomikh Falls) …standing where we are today, on their indelible footprints. All the tribes came together right here, every tribe in Southern Oregon.

“I came to sit in the same place where my father sat (on the Story Chair) and let people know that we are carrying on the culture and the traditions of my people here.

“This (Salmon Ceremony) must be done. This must be carried on to save the Salmon Nation, the swimmers in the water. Not just in the Rogue River right here, all over the world. I am that voice. You are that voice.

“We’ve got to take care of our rivers and streams if we’re going to live on this planet. I want it to happen. I have 5 generations alive today. I want those kids to get gray-headed like me and have clean air and clean water. Don’t you? This is what I’m carrying on …my people’s unfinished work.”